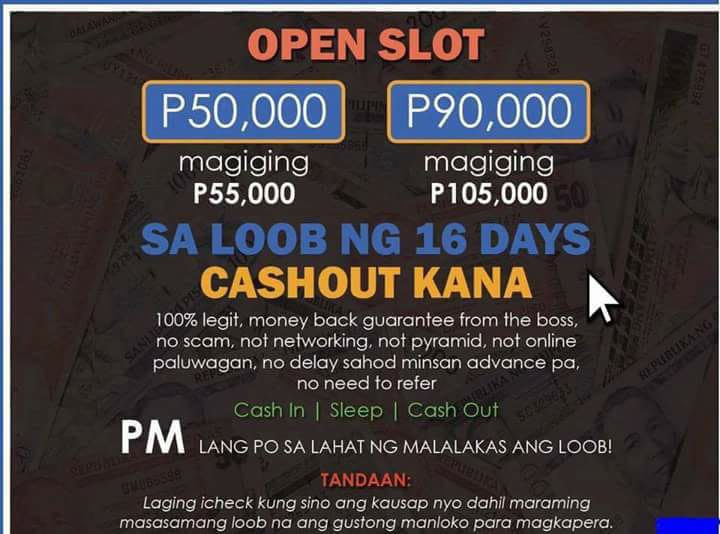 I have skin in the game (I have Bitcoin holdings, a good friend of mine is the top Bitcoin expert in Europe and I have plans to integrate Blockchain technology to one of our SaaS company), so I was itching to make this article. The recent ₱900,000,000 Bitcoin scam perpetrated by Arnel and Leonady Ordonio is both sickening and ludicrous. 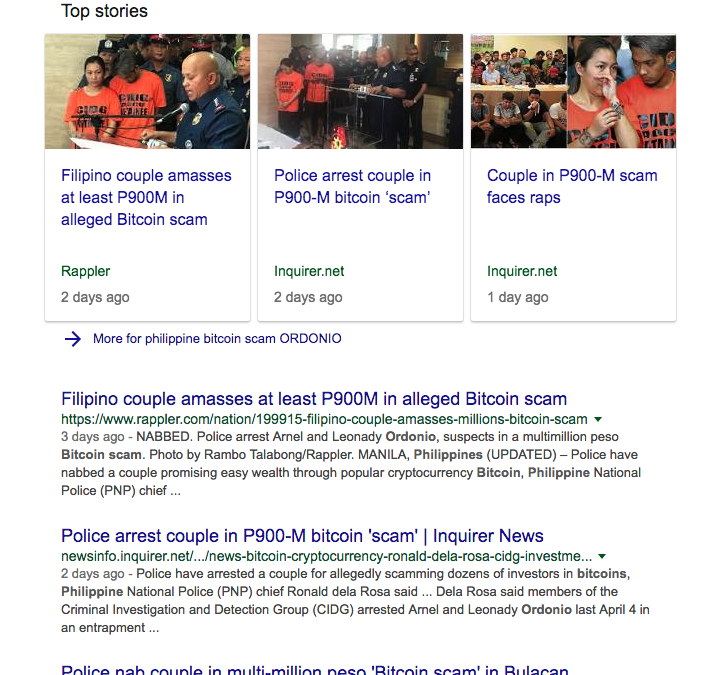 Sickening on one end as this scam leads to a lot of financial, emotional and psychological harm to the victims and ludicrous on another end, since people, mostly adults with good education and government work, still fell for this get-rich-quick scheme.

It’s the Philippines’ very own version of BITCONNNEEEEEECTTTTT!! For those that doesn’t know, BitConnect is a Bitcoin Ponzi scheme in the US. You can read more about it here.

Here’s a graphic of the BitConnect’s Referral Program: 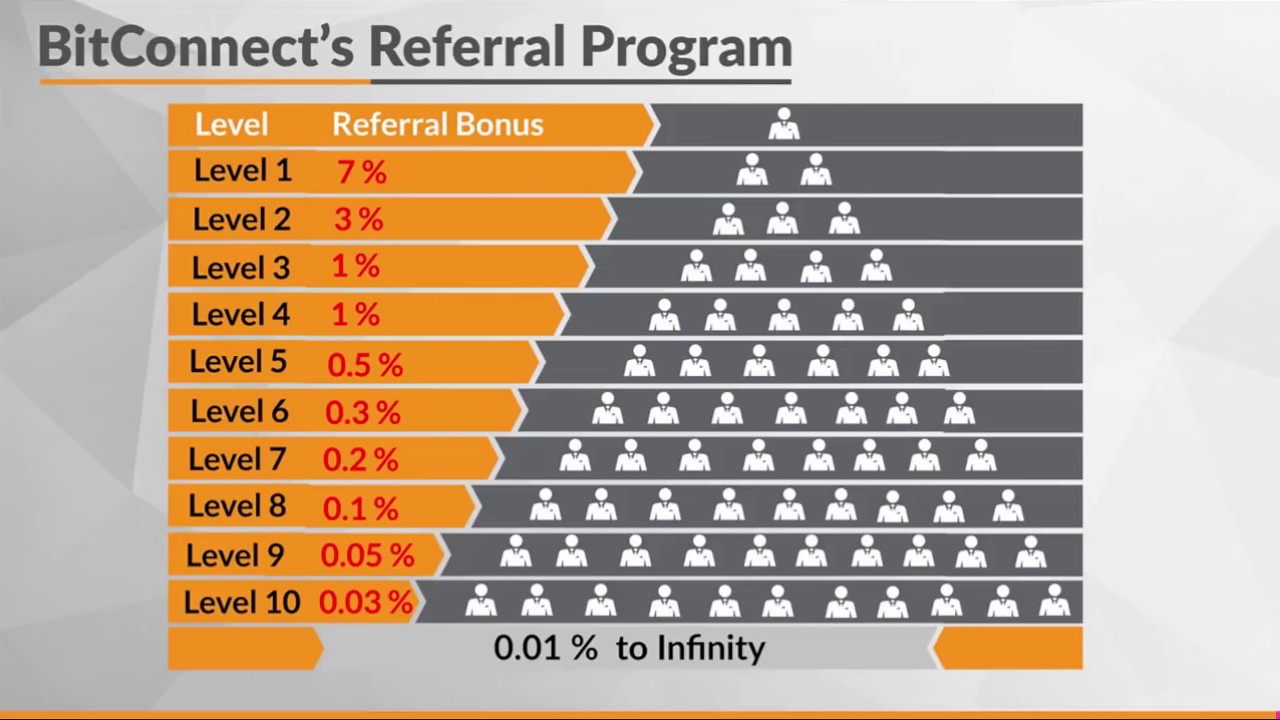 With BitConnect, investors were promised 1% return per day. For a $1,000 investment, an investor could earn as high as 40% profit per month!

This was the very same tactic the Ordonio group employed:

“Under the scheme, investors were promised of at least 30 percent profit in about half a month for a minimum bankrolled capital of P90 thousand. Some of the investments went as a high as P29 million.” –CNN Philippines

Now that shit hit the fan, what could the victims do?

It’s highly unlikely that the Ordonio’s would return the money, but there’s still a slim chance to get some of it back. When they reached ₱500,000,000, they could’ve bailed and flew out of the country, but they didn’t. This indicate that, yes, they were greedy, but more importantly, they were not that smart.

I did a little digging to determine what happened to the Ordonio’s Bitcoin holdings and what I found out was pretty interesting.

Where do we begin?

Bitcoin transactions are permanently recorded through the Bitcoin Blockchain, making it traceable. This has been proven by the FBI with the capture of Ross Ulbricht, the creator of Silk Road, an online black market for drugs, guns and other illegal items and services. 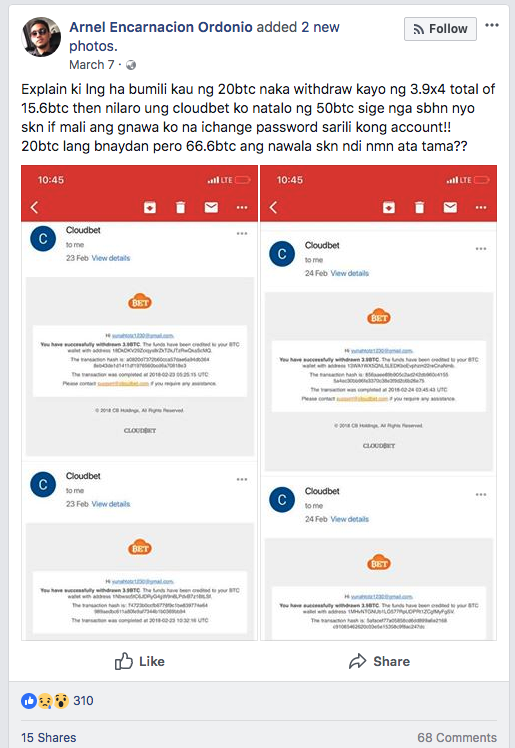 The screenshot contains emails from Cloudbet, a Bitcoin betting and casino platform.

These Cloudbet emails contain Bitcoin wallet addresses, which we could presume, is owned by Arnel. 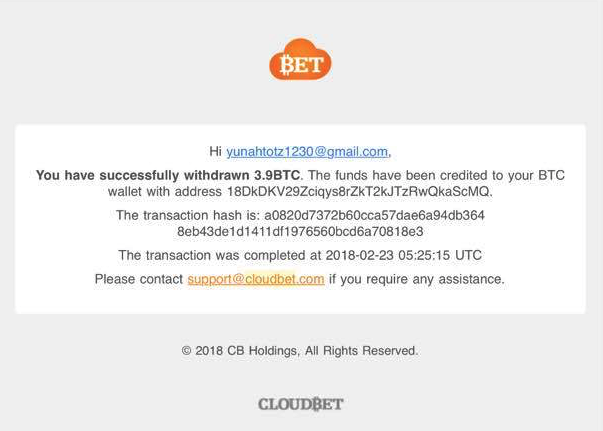 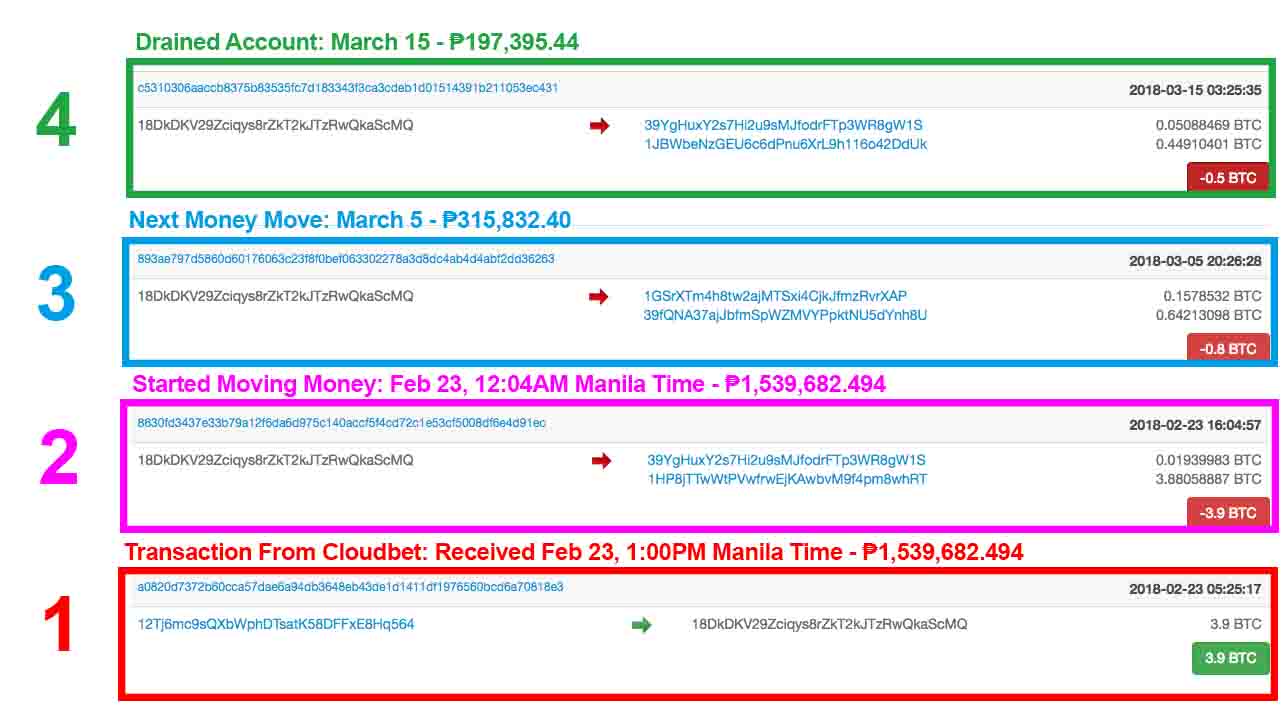 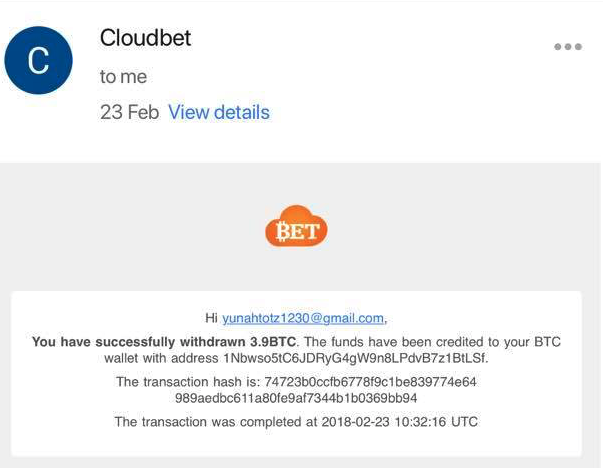 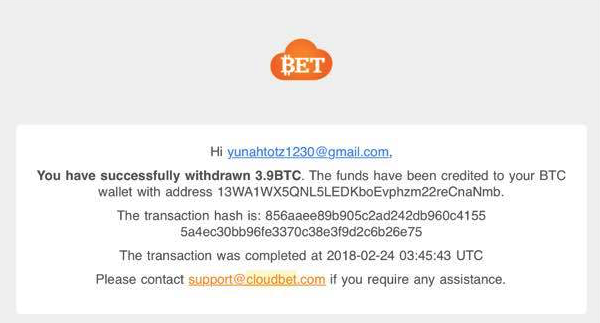 They kept the money in this wallet for 9 days.

Within 24 hours, the money was drained from this wallet.

I had initially wanted to track down all the wallets to see where the money went, but after a few hours of checking, it was apparent that they were splitting the Bitcoins into several wallets, cashing out some and further distributing the remaining Bitcoins. It would be very time consuming to track all. It’s the most obvious tactic to confuse and slowdown the police authorities.

Retrieving Part Of The Scammed Money

The only positive thing I could get from my initial tracking activity is that the money from the 1st Bitcoin wallet address is still on the move as of April 12. This means, the cohorts of the Ordonios’ are still active and might be looking to cash out soon.

It would be to the best benefit of the Criminal Investigation and Detection Group (CIDG) to work with the management of Coins.ph, Rebit.ph, LocalBitcoins.com, BuyBitcoin.ph and other registered Bitcoin exchanges in the country, in tracking the Bitcoin wallet addresses and stopping the remaining fugitives from cashing out. If they allow the cash out of the Bitcoins implicated in this scam, they can be liable in aiding money laundering.

Another possible option to retrieve some of the money, is by getting a hold of the Bitcoin wallet of the Ordonio’s. This means the CIDG must confiscate all the electronic devices (computer, laptop, cellphones, hard drives, CD’s, flash drives, simcards, memory cards) of the Ordonio’s, including the devices of their relatives and all paper documents inside their properties (house, car, etc) to look for their 12 Word Backup Phrase. This 12 Word Backup Phrase can help open their Bitcoin Wallets.

It is highly likely that the Ordonios’ kept a stash of Bitcoin hidden safe from the authorities through a small piece of paper or a memory card, which they could withdraw if they get out of jail or through a dummy. ₱900,000,000 is a huge sum, so the CIDG must not leave any stone unturned.

While checking the history of the Bitcoin scam, I chanced upon a Facebook Page called PrivateX. The administrator of the page have posted warnings about the scam as early as December 17, 2017. 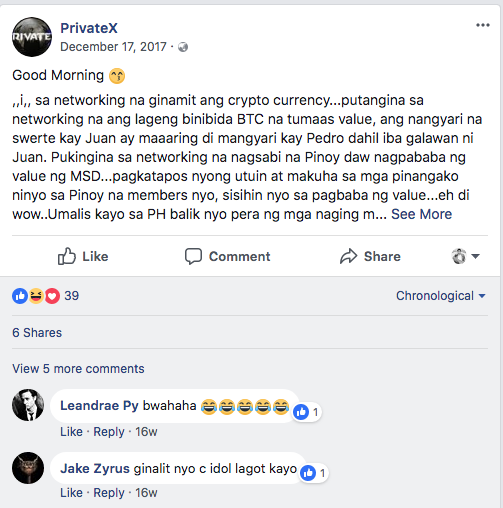 It should be made clear that the Ordonio group used Bitcoin as front for their Ponzi scheme. Bitcoin, as digital currency, is not a scam.

SO HOW IS THIS CONNECTED TO REAL ESTATE?

Negative press on Bitcoin impacts the future of our Bitcoin-Real-Estate-related projects.

One project that we have on the pipeline is the integration of blockchain in the record-keeping of listings. As you might have seen in the Bitcoin wallet address tracking activity, all the Ordonio’s Bitcoin transactions were recorded permanently, they cannot obfuscate or hide their transactions. Once recorded, it will also be impossible to change, modify or delete. In very simple terms, a record on the blockchain means it is stored in a decentralized system; if a person would like to change, modify or delete a record, s/he would need to change all the record from the other users, INDIVIDUALLY.

The implication of this decentralized technology in real estate is huge! One use case would be to utilize this to store the listing transactions for rental properties.

i.e. We can have a permanent historical record of Condo1 in terms of who the lessee and lessor was, when and who were the agents/brokers involved, how much was the rental fee and what were the terms of rent. People from 30 years in the future can backtrack the history of the property! Disputes could easily be resolved by simply checking on the blockchain record of the property since it cannot be tampered by anybody.

This is the power of Bitcoin and its Blockchain technology. This is the reason why I dedicated time in writing this piece, to help do my part in protecting Bitcoin’s reputation in the Philippines.

There you have it. I’m done and off to sleep.

Good luck to the victims!

Non-tech Martian trying to change the real estate industry for the best through technology. Back in September of 2021, we published RESIDENTIAL REAL ESTATE PRICE INDEX AND ITS...
Continue reading
by Jake Nasol Loria 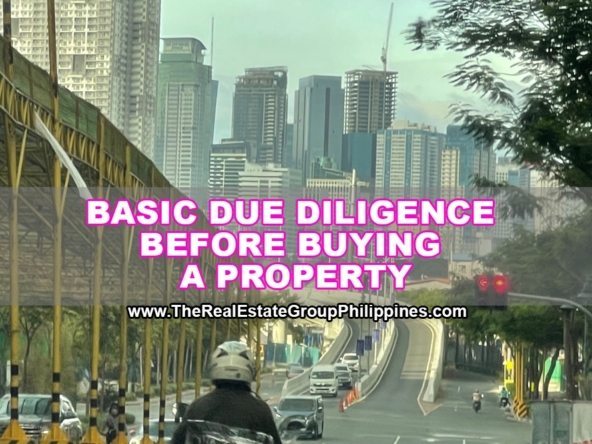 BASIC DUE DILIGENCE BEFORE BUYING A PROPERTY

TL;DR: When buying properties on the secondary market or those properties not owned by reputable...
Continue reading
by Jake Nasol Loria 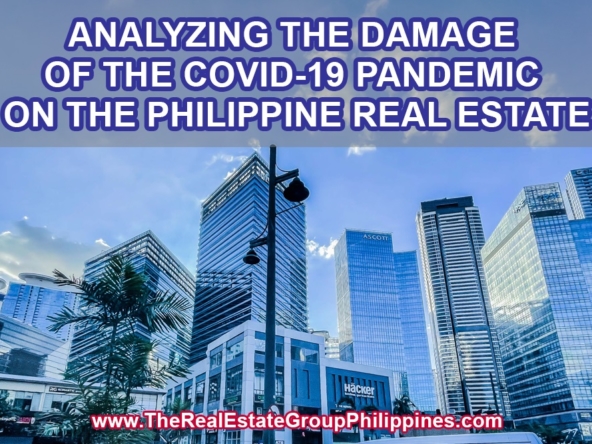 Some disclaimers before we proceed: (1) Nothing here should be construed as financial advise. (2) I...
Continue reading
by Jake Nasol Loria

Search For A Topic

Please enter your username or email address. You will receive a link to create a new password via email.